Welcome to our new feature!  Every month, we will tell you more about one of our wonderful sponsors who generously support programs in Third Place Commons and at the Lake Forest Park Farmers Market.  It is appropriate, and a bit poignant, to start by recognizing Great Harvest Bread and its owner Jeff Weissman.

Born in Seattle and brought up in Montana, Jeff has invested untold energy and passion into Lake Forest Park.  He and his wife Maggie opened Great Harvest 27 years ago, their first store in Laurelhurst, followed a few years later by the one we all know and love on the lower level of the Town Center.  After years of working in his family’s business, Jeff was ready to make a career switch at the same time Maggie decided to leave her job.  Both were intrigued by the innovative business plan of a new bakery franchise launched in Montana.  Jeff’s sister Sally was the first family member to jump on the Great Harvest Bread bandwagon by opening a store in Minneapolis.  By the time she had settled her new enterprise, Jeff and Maggie were ready to become apprentice bakers.

It is remarkably easy to romanticize the life of a baker, and Jeff is the first to admit that his first few years were a merry-go-round.  First, there are the hours: the relentless 3 a.m. starts, unloading and stacking thousands of pounds of flour by 9 a.m., serving customers until closing, and maybe, just maybe, back home for a quick dinner before falling into bed 16 hours later.  Then there are all the financial commitments: the first few years of business required Jeff and Maggie to invest all of their resources, and the payback was slow.   Jeff sold his car to keep things afloat until the tide turned.

While Great Harvest Bread did not make the Weissmans millionaires, it became a solid living.  Even more important, it gave them what they wanted most: community.  Jeff has strong memories of his grandfather, a Russian immigrant who settled in Montana and started a business to serve farmers in the area.  He was a man of his word, a trusted and valued neighbor whose handshake guaranteed fair deals.  Jeff vividly remembers his grandfather’s funeral on a frozen Montana day, the mausoleum packed with people who had closed up shop and braved the elements to pay their last respects.  A teenager at the time, Jeff looked at the crowd of people who loved his grandfather, and he saw his own path.  Whatever he chose to do, he would do it with pride and respect, and he would do it in community.

For nearly 3 decades, Jeff Weissman has taken pride in every loaf of bread baked and sold at Great Harvest.  He has gotten to know his customers, and has been involved in his community in every way possible.  He was a founding board member of Friends of Third Place Commons and remains an advisor. Jeff is a longtime member of Lake Forest Park Rotary, and was instrumental in setting up daily bread deliveries to local foodbanks.  He was selected to serve on the City of Lake Forest Park’s Economic Development Committee, and has for the last several years, has been a valued member of the Community Services Commission.  Our local PTSAs gratefully acknowledge Jeff’s generosity, and many have participated in fundraisers as Bakers for a Day.   And students know Jeff as Colonel Wheat – or is that Kernel Wheat? – the friendly guy always happy to show them around the bakery and give them a slice of warm bread. 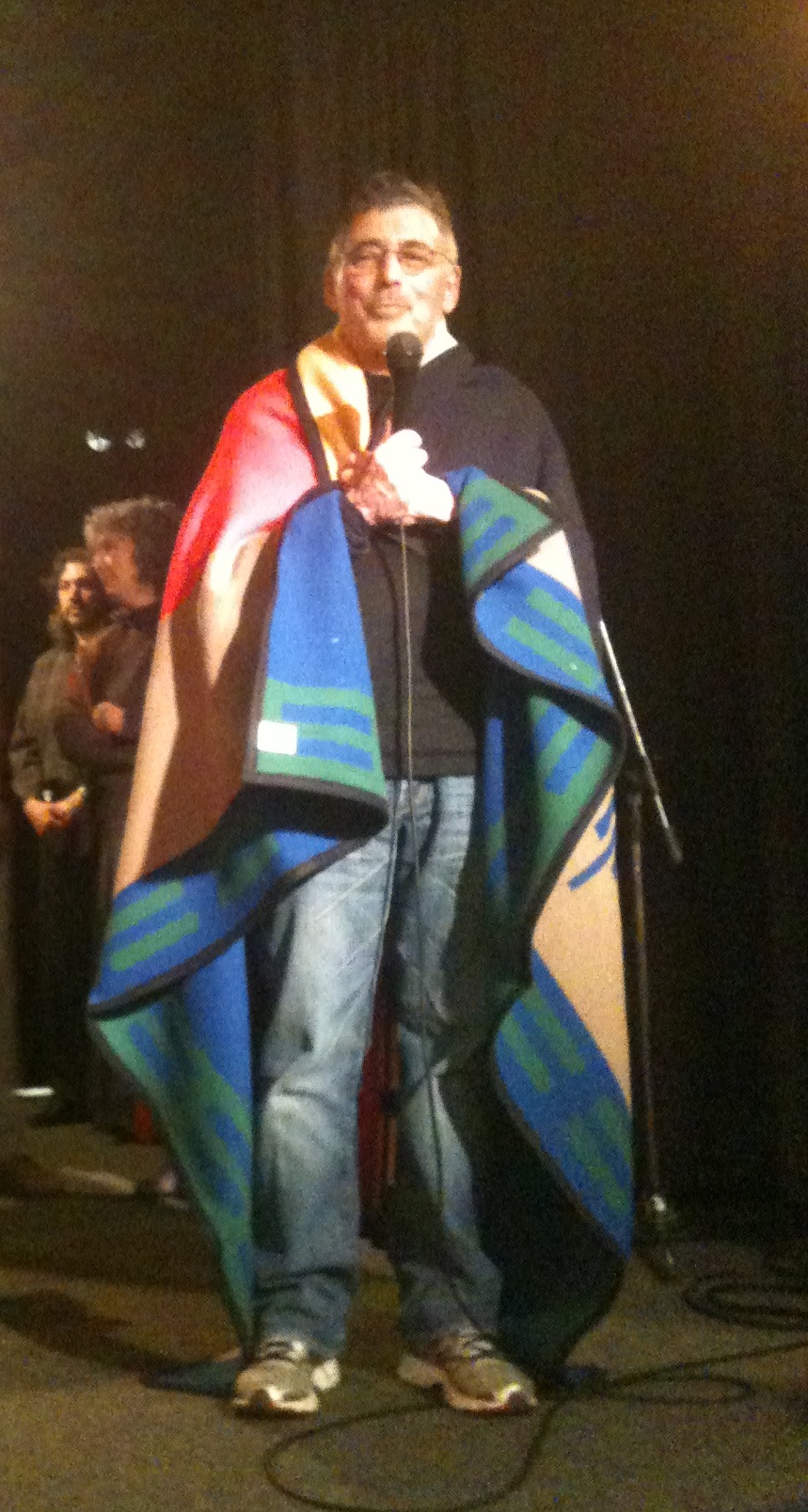 On Sunday, March 10th, Third Place Commons assembled many of Jeff’s friends for an afternoon of music and celebration.  Between sets, acclaimed musician Gary Stroutsos presented Jeff with a Pendleton Blanket, a gift of honor and appreciation from Third Place Commons and the Lake Forest Park Rotary.  Standing on stage, wrapped in a vibrant image of the Circle of Life, Jeff announced his retirement.  He told us that he has sold Great Harvest Bakery, and is hopeful that his successor will continue in the tradition of community involvement.  Jeff promised us that he will not disappear, that instead, he will be more involved in this little city than ever.

We all know Jeff to be a man of his word, and look forward to seeing him often.  He has given us all so much.  So our collective wish for Jeff: good health, clear days for long bike rides, hours to spend with your grandchildren, and regular visits with the people whose lives he has enriched for so many years.  Thank you, Jeff!