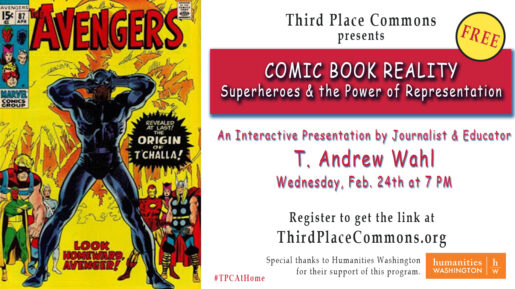 Representation matters. For nearly a century, from Wonder Woman to Black Panther, superheroes have been reflecting the challenges of our times and showing us our potential. Their cultural relevance and influence is powerful.

On Wednesday, February 24th at 7 PM, join us to explore the impact and significance of these potent images and stories in “Comic Book Reality: Superheroes & the Power of Representation.” Teens welcome! 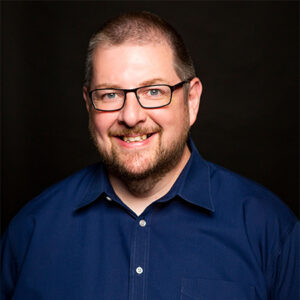 Presenter T. Andrew Wahl is a journalist who has worked as an editor and editorial cartoonist. Wahl is a lifelong comic book aficionado, focusing on the Bronze Age (1975-85) of the American comic book. Wahl studied comic books as a part of his MA in the humanities at Fort Hays State University. He currently teaches journalism at Everett Community College.

As a comic book historian, Wahl has spent years charting the evolution of comic books and superheroes as reflections of their times, as well as their influence on culture. And as comic book superheroes have diversified, he has also observed a noticeable evolution in their audiences.

As Wahl explained in the Bainbridge Island Review, “When I was a kid, if you went to a comic book convention … it was probably 95 percent white men in the room. If a woman walked in the room it was actually like a unicorn coming in, we’d all kind of stop and stare. And now if you go to Emerald City [Comic Con] in Seattle it’s about 50-50 in terms of the gender mix; people from all walks of life, all different kinds of sexual identity backgrounds, race and ethnicity backgrounds. It’s just a much more encompassing community now and all of that has been reflected in the stories themselves.”

From Captain America (born to fight Hitler and the Nazis) to Wonder Woman (created to foster feminism and peace) to the X-Men (who gained their powers in a metaphorical civil rights movement), Wahl explores the significance of characters who are considerably more than kids’ stuff.

So whether you’re a lifelong comics fan or have just a passing interest in the latest Marvel blockbuster, tune in Wednesday at 7 PM to find out what you’ve been missing.

Next Post: 25 Movies We Love for Black History Month & Beyond