Earlier this month, a community of friends and neighbors gathered in virtual space for the Third Place Commons Rebuilding Community Annual Celebration and Fundraiser.

The program featured videos of bands from the Weekend Music program as well as a joyful look at the Lake Forest Park Farmers Market. A variety of speakers, led by emcee and Third Place Commons board member Matt Broweleit, shared some fun and impressive tidbits including: 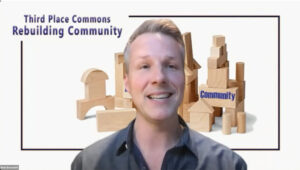 The program highlight was speaker Eric Liu, the co-founder and CEO of Citizen University, who inspired everyone by exploring the question, “How shall we live together?” Liu framed our way forward through three things: civic faith, civic fellowship, and civic future.

Liu identified civic faith as our choice to engage with our community in places like Third Place Commons with the belief and understanding that through engagement, we strengthen the very foundations of democracy.

As Liu noted, Third Place Commons is a place where people choose every day to “take a leap of civic faith” and join in. And as we all join in, we build civic fellowship. 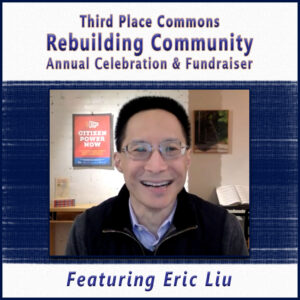 Civic fellowship is how Liu described the ways we see ourselves as “contributor[s] to a community” and as “woven into the fate and fabric of this place.”

Liu noted that “every program at Third Place Commons is an absolute seedbed for the flowering of fellowship… turning strangers into friends, turning friends into fellows.”

Liu also commented on the fact that Third Place Commons has been doing this work for 22 years, observing, “It has been a generation that this experiment has been flowering and taking root in this particular garden of democracy.”

However, Liu also pointed out that gardens require gardeners. “What we’re here to do it to make sure that another generation of people get to enjoy the fruits and the benefits of Third Place Commons. And so every dollar you invest in this institution is not just about the now, it’s about the future.” Our civic future.

Although Liu acknowledged there were a lot of reasons to feel pessimistic about things happening in our country and around the world, he pointed to Third Place Commons as “one of the brightest guiding lights you can imagine” and “a beacon of hope.”

“It’s incumbent upon us to hold up this bright light that’s called Third Place Commons and remind each other, and remind the world, and show the world, what’s possible when you invest for the long haul. When you take that cyclical responsibility for sustaining this garden of democracy,” Liu said.

The Rebuilding Community event was a fundraiser to raise vital support for Third Place Commons programs, including live music, community events on the stage and in the Commons, virtual events and meet-ups, and the Lake Forest Park Farmers Market.

If you missed the event, you can still show your support for Third Place Commons and the Lake Forest Park Farmers Market. Make a gift here.

Next Post: Dancing Is Back at Third Place Commons!